Home › Beyond the Build › Conservation › You Are What You Eat, So Stay Close to Your Food 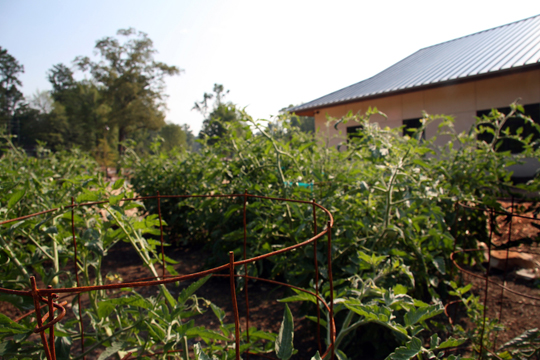 You Are What You Eat, So Stay Close to Your Food

I was drinking a bottle of water the other day and read the label. It claimed to be “green” and great for the environment where it was bottled in Viti Levu, Fiji. Then I got to thinking about the millions of pounds of fuel they probably burn every year shipping it to the U.S. for us to drink. Is that equally great for the environment? Obviously not. The moral of the story is that we all need to be closer to the food we eat and the water we drink to truly be green.

When we moved into our new office campus last year, project manager Robbie Cather decided that he wanted something worthwhile to look at when he stared out his window everyday. So he went out one Saturday, bought a bunch of potting soil, rocks and long wooden stakes and sectioned off a few hundred square feet of the office lawn to build a tomato/vegetable garden.

Last year he and the Stewart Perry team members who volunteered to help him produced several bushels of tomatoes from those 16 tomato plants. The tomatoes were picked every morning and brought to the lunchroom where they found their way into sandwiches, burgers and gift baskets for anyone who might be visiting our campus that day.

Despite the success with his tomato garden, Robbie has decided not to give up his job in construction and go into farming. Stewart Perry has decided to stay in the construction business as well. However, the tomatoes were an important symbol. The only energy burned to grow the tomatoes was the hand tilling, weeding of the patch, occasional watering and then the plucking of the tomatoes. To get to our plates, they only traveled the 100-yard distance from the plants to the kitchen.

While it might be cheaper to grow food in other parts of the world, they have to burn thousands of pounds of fuel to ship it here, which not only increases costs, but creates pollution. By bringing us closer to our food physically we are burning less fuel and reminding each other where the food comes from.

This year we are adding cucumbers and mint, and everyone has started to bring a change of clothes so they can go garden on their lunch break. I challenge you to think about where your food is coming from and take steps to reduce your carbon footprint. If you are what you eat, and you claim to be green, let your plate reflect your philosophy.